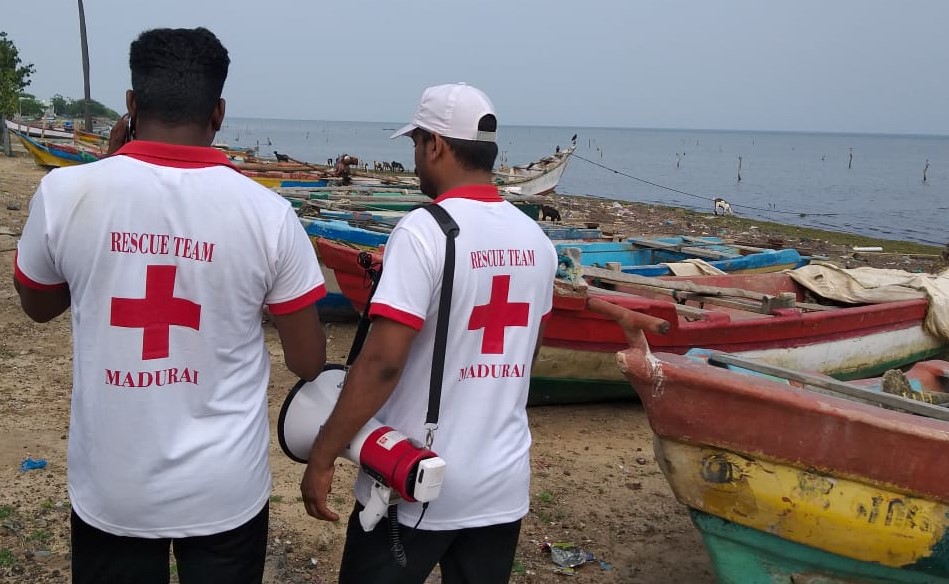 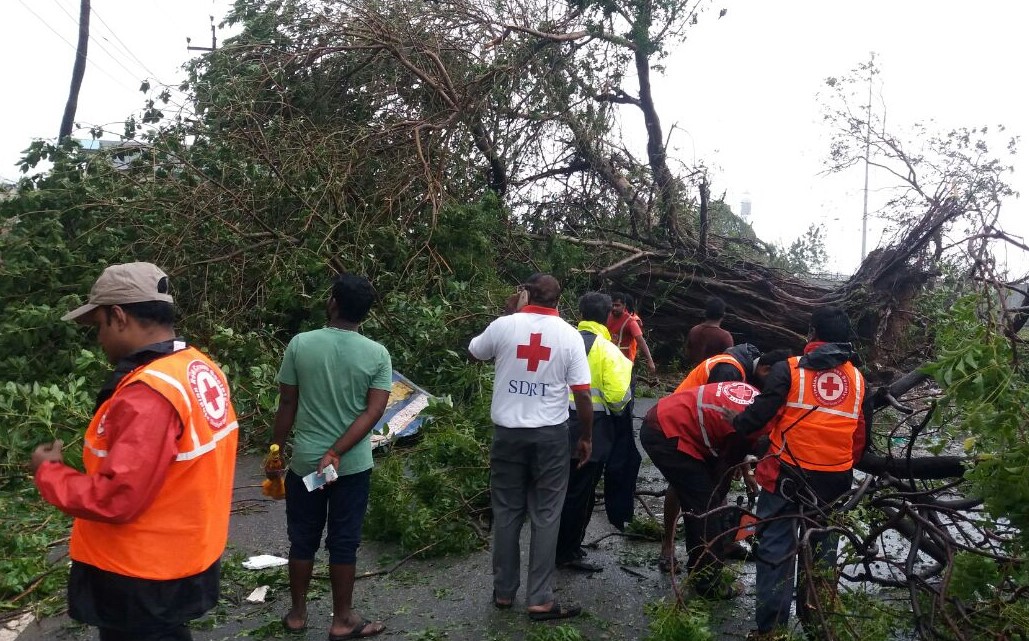 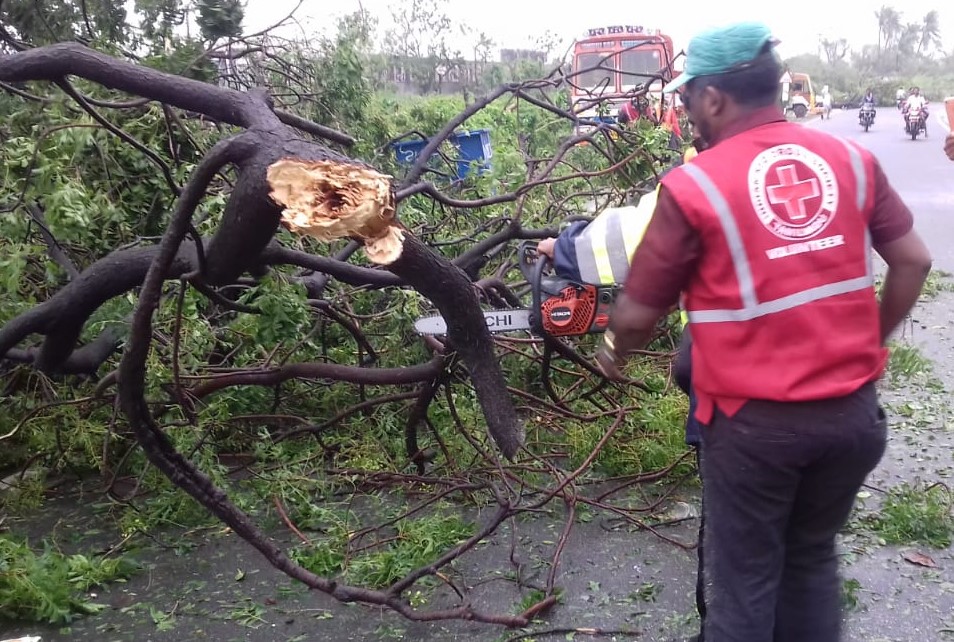 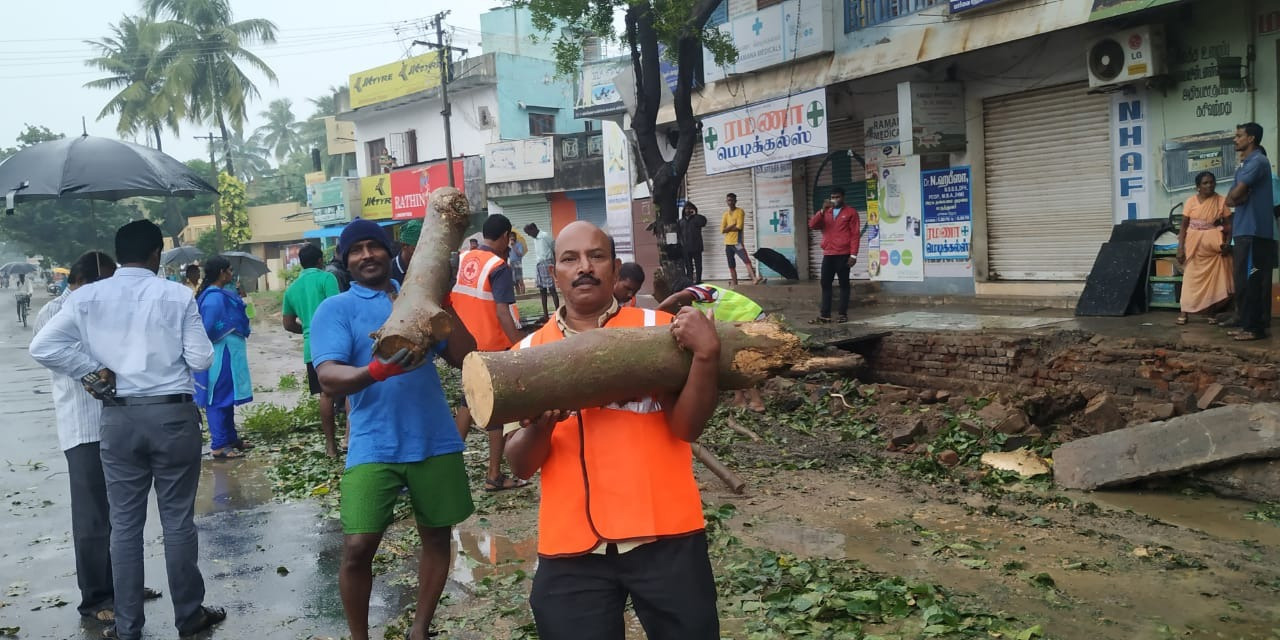 Images of Indian Red Cross volunteers in action, removing debris and fallen trees to restore mobility for the affected community

Indian Red Cross Society (IRCS) has been responding to the immediate needs of the affected community in Tamil Nadu that bore the brunt of Cyclone Gaja as it made landfall in the wee hours of Friday, 16th November 2018.

The cyclonic storm left at least 45 people dead. About 250,000 people were evacuated and housed in 493 shelters. The wind speeds reached a high of 120 kilometres per hour, knocking down over 1,70,000 trees. Over 55,000 houses were completely destroyed with half of them being thatched structures.

As the low pressure along the coast intensified drawing the cyclone generated at the end of the North East monsoon, Indian Red Cross Society Tamil Nadu State Branch was called in to support elaborate plans by state agencies for preparedness and evacuation. IRCS has trained National Disaster Response Teams (NDRT), National Disaster Water, Sanitation and Hygiene Response Teams (NDWRT) as well as State Disaster Response Teams (SDRT), members of the team were alerted and deployed when the storm hit. IRCS Tamil Nadu branch had extended support during the Kerala Floods with volunteers and technical support teams. The strong capacity and response readiness allowed IRCS teams to engage in a range of activities along with state agencies.

In the aftermath of the Cyclone, Indian Red Cross Society in the state responded with following activities:

Altogether, a total of 145 Red Cross staffers and trained volunteers were deployed in Nagapattinam, Tiruvarur and Thanjavur, the worst affected districts. The teams had access to heavy machinery, high powered cutters and special gears for clearing debris, removing fallen trees and burying carcasses of goats and cattle.

Shelter has emerged as one of the most important and immediate need in three of the worst affected districts – Nagapattinam, Thiruvarur and Thanjavur. Support is needed for families that lived in thatched houses and were destroyed by the high velocity winds and heavy rainfall. Currently, these people are living in temporary shelters. The identified initial needs have also been corroborated with the needs identified by the Inter Agency group (IAG) coordinated by Sphere India Chapter.

IRCS proposes to support approximately 3,500 households in the three affected districts with tarpaulins for shelters, kitchen sets, clothing, blankets, towels and buckets. The Red Cross branches in the state have also been mobilising material and funds for relief work.